The Best Cobbler Recipe Ever!

I found this super cute Strawberries 'n Cream baker by Sheffield at the thrift store this weekend and just had to buy it.  I have 4 plates and 2 ramekins that match so there was no question as to whether I would be bringing this home with me or not.  It was meant to be mine!

The only question I had was, "What am I going to make in it?"  Cody was quick to chime in with his idea.  He wanted Cherry Cobbler.  The boy loves Cherry Cobbler and after trying many different recipes, I finally found the one that he can't get enough of.  I found this recipe in a magazine, it's for Peach Cobbler but it works for any fruit cobbler. 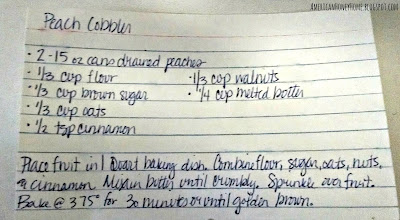 It's so easy and so delicious.  Just melt half a cube of butter in a bowl, add 1/3 cup each of flour, brown sugar and oats and sprinkle in a 1/2 tsp of cinnamon.  Mix it all up and spread it on the top of your fruit. 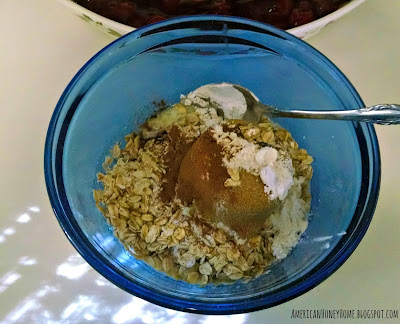 You can see the recipe calls for 2-15 oz cans of fruit but my new baking dish held just one can perfectly.  I normally double the cobbler recipe but for the size of my baker, I just did one recipe. 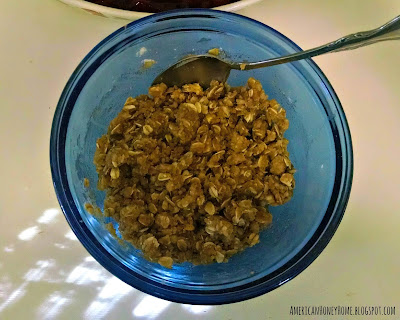 Bake it in a 375 degree oven for 30 minutes.  The smell is phenomenal and makes your mouth water while it is baking. 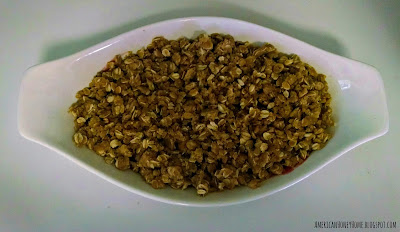 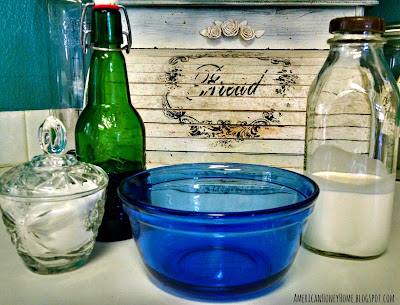 It comes out golden and perfectly baked.  Let it cool for a bit, if you can handle it! 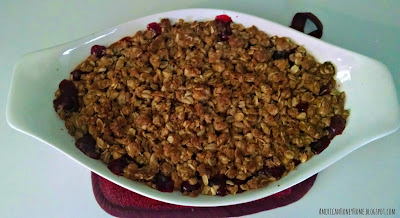 Then dish it up and add a dollup of whipped cream to the top.  You will probably go back for seconds or thirds or just eat it straight out of the baker.  It's up to you! I promise once you try this cobbler recipe, you won't be disappointed.  Cody wants me to make the cobbler plain so he can he can eat it by the handful!  It's just that good.

Linking up with:
Dishing It & Digging It
Monday Social
Amaze Me Monday
The Art of Homemaking Monday
Cooking & Crafting with J & J
Show & Share

I've been craving cobbler but needed a quick easy recipe for one. This one looks great and so easy to do. thanks for this one right when I needed it.

Lovely cobbler Trisha. Easy and yummy is good in my book. Thank you for sharing this delicious cobbler at Di&DI.

Hi Trisha, I love your cute dish and the cobbler looks and sounds so good! Thanks for sharing at C&C with J&J.

I would love for you to share this with my Facebook Group for recipes, crafts, tips, and tricks: https://www.facebook.com/groups/pluckyrecipescraftstips/

Thanks for joining Cooking and Crafting with J & J!

I will have to make this for my man. He loves cobbler of any kind. Thanks for sharing. Hugs and blessings, Cindy

Good morning! Just a little note to let you know that we have *FEATURED* this post today on the Art of Home-Making Mondays at Strangers & Pilgrims on Earth! Thank you for joining us! We hope to have you link up this week! :)