Landon is such a little miracle baby. He was born January 18th, 2010. At first, he seemed to be a healthy baby boy born just a few weeks early. At only a few minutes old, they found that he had something wrong with his heart. After some poking and prodding and an emergency trip to the NICU, they found that Landon had Hypoplastic Left Heart Syndrome. Essentially, the left side of his heart was not connected to the rest of his heart. His parents were completely beside themselves, lost in a fog with all that was going on. At just a few days old, he was flown to Las Vegas where he underwent 2 surgeries to reconstruct his heart. He will have to undergo one more surgery before he is 3 and he won't be able to do a lot of strenuous activities. The doctors told his parents that he would probably be skinny and weak, but Landon has proved them wrong. Can you believe this chunky little guy? 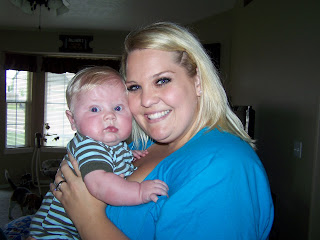 {Me holding Landon}
Landon's mom and I went to college together. We both love to plan events and even worked at the same job at the same bank for a few years. Every once in awhile we meet for lunch and go see Landon. He is the happiest, chubbiest, sweetest little guy. And I can't get over that thick pile of blonde hair! 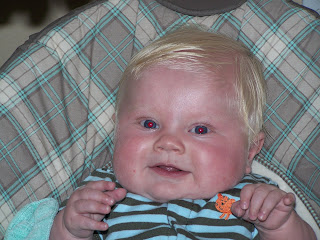 Landon is truly a miracle. In his few months of life, he has been through more than most adults. I can't wait to watch him grow up and get bigger and stronger. I am so thankful that I have this little guy in my life to remind me that when things seem impossible, there is always someone fighting a harder battle, making it through. I can't wait to go hold this chunky monkey again very soon!
Posted by Trisha at 8:03 PM

Oh Trish this little Landon is darling. I am so thrilled to see that he is doing so well. What a blessing he must be to his parents. It is a lot to go through, but it certainly looks like he is a healthy boy now.
Thank you for your wonderful comment. It warmed my heart and made me so thankful.
hugs

Hi Trisha,what a gorgeous little lump of love he is.
He'll bring everyone years of happiness with a face like his...
I love it when somehow with blessings things change for the better.
A happy life to this gorgeous little man..xx

What a cutie pie!! Hoping everything is a success with him=)