My favorite part of Valentine's Day isn't roses and chocolates-it's Conversation Hearts! I have always loved the sweet little bites of sugary goodness, but now I love all the creative things people have made with them too! They are pretty cheap to buy and 12 of them are only 60 calories! So grab 12 hearts (my favorite flavor is the yellow) and take a look at some fun things you can do with Conversation Hearts.
***
And here is a little history on the Conversation Heart-I have a history minor so I just love to learn about such things and I hope you find it interesting too! These candies really are a vintage treat!
***
"Oliver R. Chase invented a machine in 1847 to cut lozenges from wafer candy, similar to Necco Wafers, and started a candy factory. Daniel Chase, Oliver's brother, began printing sayings on the candy in 1866. He designed a machine that was able to press on the candy similar to a stamp. The candy was often used for weddings since the candies had witty saying such as: "Married in pink, he will take a drink", "Married in White, you have chosen right", and "Married in Satin, Love will not be lasting".The heart-shaped conversation candies to be called Sweethearts got their start in 1901. Other styles were formerly produced such as lozenges, postcards, horseshoes, watches, and baseballs. As of 2010, the classic pastel candy formula is being abandoned. Sweethearts will be softer candies with vivid colors and all new flavors. Line extensions carrying the Sweethearts brand include chocolates and sugar-free hearts.In the 1990s, Necco vice-president, Walter Marshall, wanted to update some of the sayings and retire others, including "Call me", "Email me", and "Fax me". The romantic expressions continue to be revised for young Americans. Necco receives hundreds of suggestions a year on new sayings. Necco produces the hearts from late February through mid January of the following year. Approximately 100,000 pounds of hearts are made per day, which sells out in about six weeks." The new flavors were not favored by people so they went back to the old flavors in October 2011. 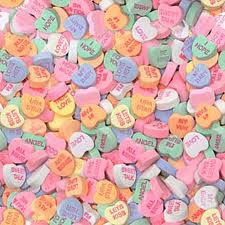 What a fun and easy idea this is. Glue a few hearts randomly on a white (or any color) candle and place it in a dish full of more hearts. Simple yet very festive! 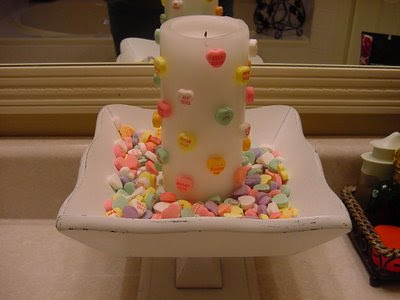 Love this idea! A cute little Conversation Heart vignette with topiaries and a frame covered in the candy. Who wouldn't love this? 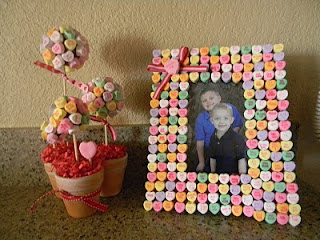 I have seen so many of these wreaths and I think I might just have to give it a try myself. I would add a fun bow to really pretty it up! 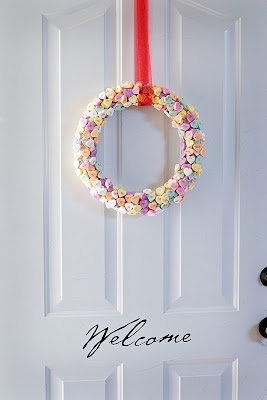 Now for even more fun, make some Conversation Heart flavored vodka. What a fun drink to have on Valentine's Day! Click here for the how-to. 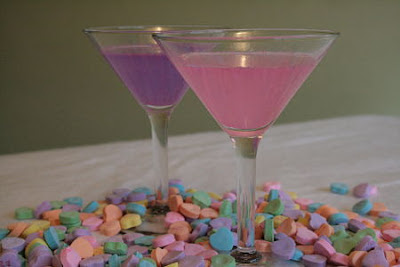 Apparently you can even make your own Conversation Hearts. I am sure the flavors just wouldn't be the same as the real thing but it would be fun to write your own messages on them. Here is the how-to on making your own! 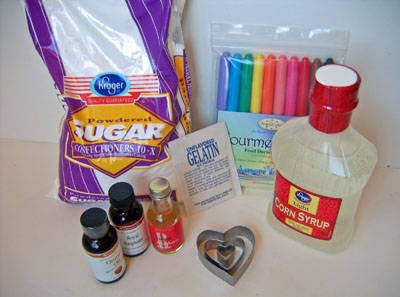 When I was in the 5th grade, I had a "boyfriend" named David. When he wasn't my boyfriend, I flirted like crazy with him. But as soon as he was my boyfriend, I got really shy. For Valentine's Day that year, I got the big Conversation Hearts to give to my class. I picked out the ones that said not so nice things to give to David. Needless to say, he wasn't my boyfriend for very long!
***
I have been hearing so many rumors about Google Friend Connect going away and I am scared to lose all of my followers. So, please be sure to follow me via the Linky Followers tab on the top right hand side of my page.
***
Wishing you all a very Happy Valentine's Day!
{all images found on Pinterest}
Linking up with:
Common Ground: Vintage Valentine Party
How Sweet the Sound: Valentine Pink Saturday
Posted by Trisha at 9:47 AM

You are hysterical. POOR DAVID! He could have been your hubby one day!

I don't think you are going to lose your followers. From what I understand we be SAFE!

So many cute creations Trisha. I loved the history of these little gems. One of my favorite candies when I was little were the Necco wafers. Love them!
hugs from here...

I can't believe you can make those things! I think they are adorable but I don't like to eat 'em...I am a chocolate girl ...I actually have 6 boxes in my pantry from last year I should finally toss :) But your picture frame is adorable!!!

I didn't even know that about google friend connect...when I get a linky account i will follow ya. I Gotta figure this stuff out!

hi there. hopped on over thanks, to the blog hop. i'm a new linky follower. would love it if you would follow me as well. have a great night!! (:

Happy to find your gorgeous blog! I'm a new Linky follower. Found you through the Linky Blog Hop! Hope you can come visit my site, when you have a moment. http://www.eccentricleopard.com/

I knew I liked you! Yellow conversation hearts are my fav too:) Cute ideas Trisha!!!

Just stopping by from the Linky Party Hop. I hope you will visit www.laughterandgrace.com and follow back.

I found you via the Linky hop and have become your newest follower. Hope you have a chance to visit my blog and perhaps follow me back.

Ohhhh so many thing to do with the little hearts! Who knew?! Visiting from Pink Saturday...

Happy Pink Saturday! What a perfect Valentine's Day post. :) Can you believe that those conversation hearts are not sold in Germany at all?

I was trying to remember how many of these hears I ate as a child! Oh My! Happy Valentine's day and I am a new follower from Pink Saturday and Linky Followers!

Rolling on floor laughing....poor David. I am still eating those sweet candy hearts. The purple ones are my very favorite ones. Happy Valentine's Day.
Joyce M

I think I'll stick with the store bought ones! Love the candle, so very sweet! Happy Pink Saturday! ~Diane (I am #16)

Loved the history of the conversation hearts. I bought a bag the other day...as I am on an allergy free diet (for me) milk, strawberries & chocolate are out because of asthma, but conversation hearts are in! Fun post! Didin't know you could do so many things with'em!
Ruth

Happy Pink Saturday Sweetie...
Oh what a beautiful share today. I have always loved these conversation hearts as well. I never thought about crafting with them though. I love the idea of them on the candle, they look SO pretty.

How cute to surround a frame as well. Just the perfect little inexpensive gift for that special little someone in mind.

Poor David. That story is so darn cute. Love it.

Thanks for sharing sweetie. Have a glorious weekend and Happy Valentine's Day. Country hugs and much love, Sherry

My hubby loves these hearts! Thanks for the great ideas. I have also made barrettes with them. They sell the plain clip barrettes in craft stores, and then I just picked out the hearts with the colors and sayings that I liked, hot glued them on and wa-lla. I sprayed them with an acrylic spray to keep them nice and from breaking. I also put some ribbon on them. sooo cute.

Trisha,
I LOVED LOVED this post because Conversation Hearts are my favorite too. I give them to my kids every year, even though they are all grown. The story was so interesting. I didn't know that the history of them went back so far. The candle and picture frame are such a clever idea. I'm so glad that you saw my Valentine message on our blog, because you are one of the ones that I truly wanted to see it. Happy Valentine's Day, and I hope you have a special day of love.
~Sheri at Red Rose Alley

what a history lesson..thanks!! You did really fun creative stuff with those little hearts!
i am your newest follower..pls follow back if you can.

Cute conversation hearts! Found you through the Linky Followers blog hop. Hope you can come by for a visit... www.domestically-speaking.com

Love the conversation hearts and the creative ideas! So sweet! Yeah, David wouldnt have been to happy! LOL

Luv all of the info on the conversation hearts and what YOU did with them. Why don't you link your post to Seasonal Sundays?

Stopping by from the Linky Follower Party Hop! http://queenofsavings.com