I am a sucker for a good brownie.  As long as it doesn't have nuts, I won't pass it up!  The love of brownies runs in my family...my brother is having a brownie wedding cake instead of an actual wedding cake when he gets married in June.  Our mom is a professional wedding cake decorator and I think this will be a first for her!  We just love brownies and I love to make them.  Whether they are made from a box and doctored up or made from scratch, they are one of my favorite things to make!  If you are an avid Pinterest-er, you have probably seen this recipe for Lunch Lady Brownies.  The story goes that over 5o years ago, a lunch lady in Bonneville, Idaho, created this amazing brownie recipe.  It is so good that it is award winning, people!  Of course I had to try it out to see if it was as good as everyone claims it to be.  They were right, they were SOOO right! 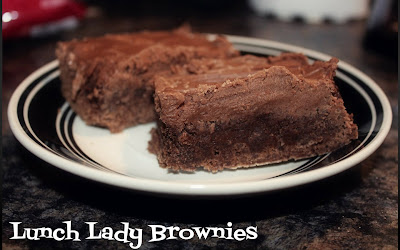 This recipe is from Salt Box House.  I followed the recipe exactly, except for I halved it since it makes a 9 x 13 pan and I didn't want to make that many.  But of course I should have because I ended up making the second half of the batch later in the week.  I am not sure if it is the brownie's chewy middle that is my favorite part or the fudge-like frosting that you absolutely HAVE TO use.  And when the recipe says to frost the brownies while they are still warm-just do it!  It really is what makes the frosting.  I wouldn't be lying if I said I could probably eat a whole (half) batch by myself.  But Lord knows I don't need to!  If you are looking for an amazing brownie recipe that has stood the test of time, this is it!  If you make it and end up eating the whole batch by yourself, don't say I didn't warn you!
Lunch Lady Brownies:
1 cup of butter
1/2 cup of cocoa
2 cups of all purpose flour
2 cups of sugar
4 eggs
4 tsp of vanilla
Melt the butter in the microwave and put into my mixing bowl, then add cocoa and mix together until smooth.  Add flour, and sugar. Beat together and then add eggs &vanilla. Mix until combined. Do not over stir.  Pour into greased, floured 9x13 baking pan.  Bake 20-25 minutes @350 F or until done. Check at it at 20 minutes.
Wait only about 10 minutes to frost brownies.
Frost them while they are warm (not hot).
The Chocolate Icing Recipe:
To make while the brownies bake
1/4 cup of softened butter
1/4 cup of milk (regular milk is fine)
1/4 cup of cocoa
3 cups of powdered sugar
Dash of Salt
Mix all together and frost as desired.


Linking up with:
The Dedicated House: Make it Pretty Monday
Le Chateaus des Fleurs
Posted by Trisha at 9:23 AM

Yum! I can almost taste your brownies now, Trisha! Sounds like a great recipe, thank you for sharing! And that is so neat your brother is having a brownie "cake" at his wedding:) Bet that will be a hit!