My dad turned 60 on March 15th and we threw him a surprise party to celebrate!  When my mom and I first started planning this, she didn't know that she was headed to the ER soon to have her gallbladder removed.  So at first, she was planning a small little party with nothing too special.  Once she had her surgery and started feeling better, the plans for the party grew and grew. 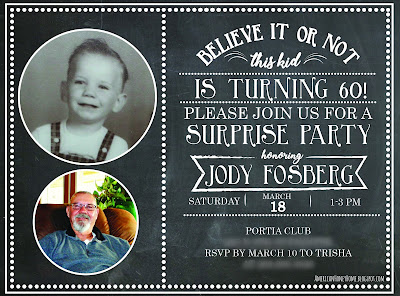 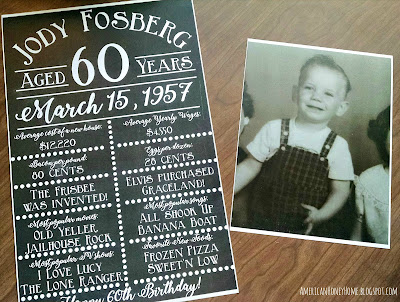 I made a fun fact sheet about the year 1957 that I framed.  This picture was used on his birthday cake, which I didn't get a picture of.  My camera was stuck in my sisters car so I didn't get pictures of the food set up or of the party and all of these were taken with my phone. 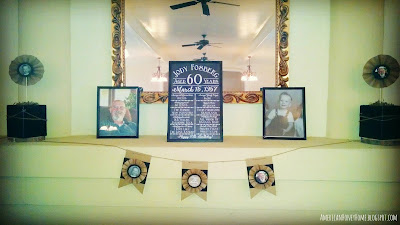 The place where we had the party has a mantle that was perfect for decorating.  The centerpieces were double-sided and I placed one on each side of the mantle.  The fact sheet was in the middle along with a picture of my dad then and now.  I also made a fun little banner to hang. 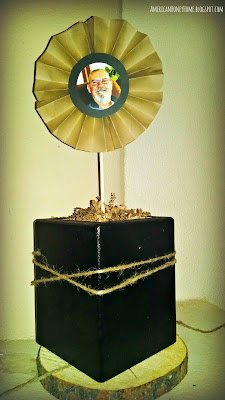 I have a huge craft closet at work where I keep all of my event inventory.  I knew I was going to be using black so these boxes that I used at the 2015 Scholarship Gala were perfect.  I wrapped some twine around them, glued a piece of styrofoam in the bottom and stuck a dowel in that with some kraft paper basket filler on top.

I bought a roll of kraft paper at the Dollar Tree and made the medallions with it.  Black poster board was glued to the medallion and then a cut out of the picture was glued to both sides of the medallion.  I set these on top of a slice of wood and used these as centerpieces on all of the tables.  Each table had a black tablecloth as well. 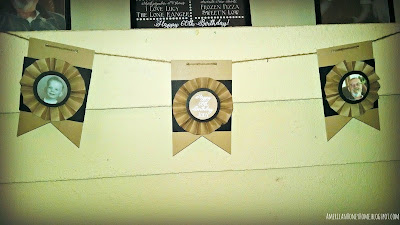 The banner used the same elements: kraft paper, black poster board and pictures of my dad.  We were able to keep this party a surprise which we didn't think we would be able to pull off.  My dad and the boys went shooting that morning while the girls set out to decorate and prep food for the party.  My brother told my dad he needed to go look at some shelves and when my dad said he would just stay in the truck, my brother had to tell him no.  Then my dad saw his cousin's truck and knew what was up but he was still surprised! 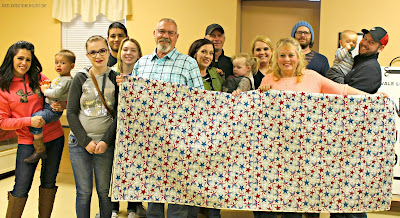 For the second surprise of the day, my dad was honored with a Quilt of Appreciation from the American Legion.  He had no idea that he was receiving the quilt but the biggest surprise came when he turned around and saw us all there.  We all drove up to see him receive his quilt and he was so surprised! 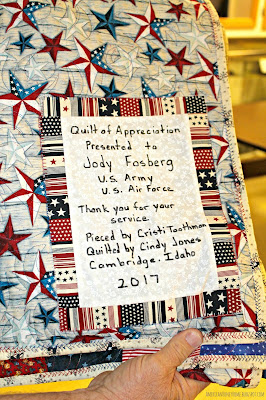 Linking up with:
Dishing It & Digging It
Monday Social
Amaze Me Monday
The Art of Homemaking Monday
Cooking & Crafting with J & J
Show & Share
Make It Pretty Monday
Inspire Me Tuesday
Wow Us Wednesday
Swing Into Spring
Talk of the Town
Share Your Cup
Share Your Style

I would love for you to share this with my Facebook Group for recipes, crafts, tips, and tricks: https://www.facebook.com/groups/pluckyrecipescraftstips/

Thanks for joining Cooking and Crafting with J & J!

What a cute and sweet party! I bet your dad loved every minute of it too. WOW...sweet gift from the American Legion. Hugs and blessings, Cindy

Have a Daily Cup of Mrs. Olson said...

How fun! The quilt is amazing. I had to have my gall bladder out last year, and boy I felt great after as well. Thanks for sharing with SYC.
hugs,
Jann

What a wonderful way to celebrate your dad's birthday. Thank you for sharing at Monday Social.

What a lovely surprise for your Dad and thank him for me, too . . . the men and women that serve our country are all heroes to me.
I've been going through some of your past blogs . . . great kitchen make over. It is so cheerful now :)
Have a lovely Sunday.
Connie :)